On March 13th, 2019 the Bag of Donuts were officially inducted into the Louisiana Music Hall of Fame.

When you come from New Orleans, your DNA is already preloaded with music, culture, food, music, carnival, and more music.

When you’re a band from New Orleans, that New Orleans tradition is infused into your performance.

When you’re the first cover band from New Orleans, to sell out The House of Blues, play Jazzfest, and have a 9-year running gig at French Quarter Fest, the largest independent music festival in the country, you consider yourself honored to be a part of such New Orleans culture.

Bag of Donuts is that band. Born from a collection of native sons of New Orleans, this incredibly popular cover band has spent the last 30 years winning the hearts and ears of adoring fans throughout Louisiana and beyond. Their playlist is familiar and loved, their costumes and stage presence exude celebration, party and everything that is New Orleans.

Perhaps you’re already thinking “Cover Band? How does a cover band get the prestigious honor of induction into the Louisiana Music Hall of Fame?”.

The answer is connection. When bands connect with audiences, and make them feel like they are as much of the event as the musicians, magic happens. Like Rice Festival in Winnie Texas, the first time the band played a large festival in Texas. They came out in their signature costumes and make-up, only to look out on a sea of cowboy hats. Gulp. What’s the plan? Do our show the best way we know how. Result? Whoops and hollers of approval and encores. Connection.

Bag of Donuts has made connection the cornerstone of their dazzling, stage performance by blending musical skill & personas, with an innate ability to read an audience and deliver the goods.

Today Bag of Donuts continues to radiate their New Orleans heritage of brass bands, rock and roll, pop radio, country, hip-hop and reggae all rolled into one big, beautiful band of color. With over 2500 gigs, 6X winners of the Offbeat Award, 9 appearances at French Quarter Fest and the first cover band to be inducted into the LMHOF, the future is wide open for the Bag of Donuts. 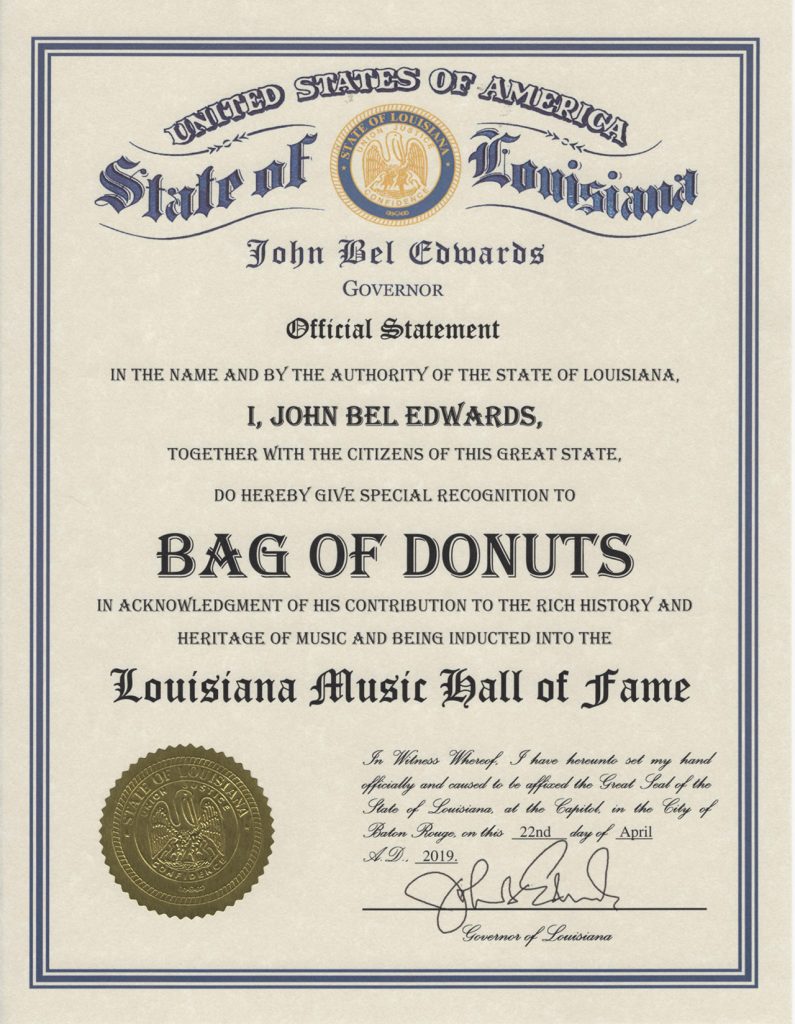